The History of Westminster 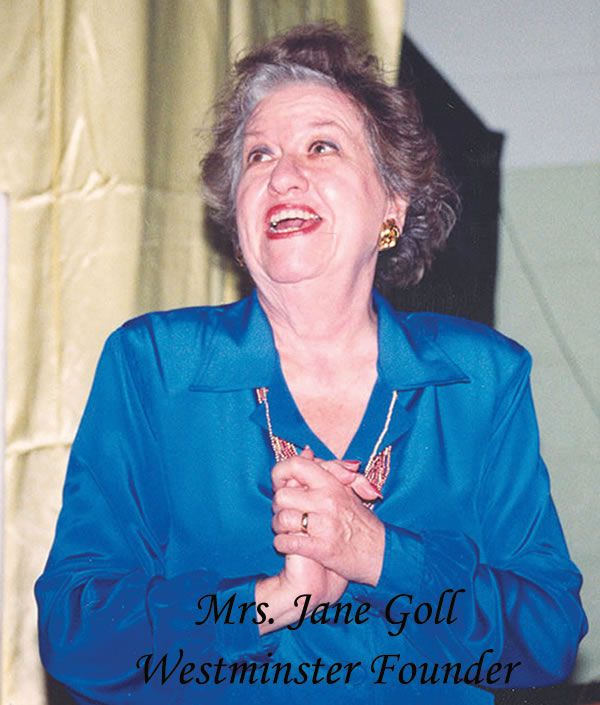 Jane Goll, who conceived and established Westminster School, was herself the product of a remarkable upbringing. Her intellect, discipline, and dedication to learning were nurtured and strengthened by the richness and rigor of a traditional, classical education in the New York City public schools, as well as the close attention and high expectations of her father.Her great sympathy for humanity and her passion for living were inspired by literature and a wide array of cultural and life experiences provided first by her parents and then through her own choices. Mrs. Goll grew up aspiring to be a teacher. She married and accompanied her husband to various governmental posts in Europe, where she experienced firsthand the educational systems practiced there. When Mrs. Goll returned to America, teaching in both public and private institutions, she felt that the schools neither challenged nor enriched the students as much as they deserved, so she decided to establish her own school.

In 1962, Mrs. Goll rented facilities at St. Albans Episcopal Church in Annandale, VA, and opened a private kindergarten class. The children in her care made such remarkable progress that their parents pleaded with Mrs. Goll to expand the program into first grade. Year by year, the program grew, and soon Mrs. Goll needed to give her school a name. Inspired by the great English school of the same name, Mrs. Goll chose to call the school Westminster.

When Westminster School’s enrollment reached the capacity of the rented facilities, the parents urged Mrs. Goll to build her own school, and they helped raise funds for purchase of property at 3819 Gallows Road. The current school facilities were built in six construction phases from 1970 to 2003. (Westminster School is now planning further expansion in the form of a state-of-the-art, turf athletic field addition and a building addition to house expanding art, science, and technology programs.)

Into her vision of a superior elementary education, Mrs. Goll wove the English dedication to classical learning; the high expectations and attention to detail emphasized in German schools; the passion for philosophical inquiry, emphasis on the arts, and the joie de vivre of the French; and the optimism, warmth, and friendliness characteristic of American schools. From these hybrid elements, fed by the passion and dedication of Mrs. Goll, her protégé, Mr. Glover (the current Head of School), and other supporters, grew the structure of Westminster, its program, policies, procedures, traditions, and values. In establishing the Western Civilization survey and classical studies as the touchstone of the curriculum, Mrs. Goll was particularly influenced by the writings of Gilbert Hyatt and Jacques Barzun. From Hyatt, she also borrowed the correlation of the sequence of the history curriculum with the particular age and developmental stage of the students.

Mrs. Goll’s intense vitality, charm, and strength of character earned her much love and respect, and her death on September 5, 1992, came as a sorrowful shock to the Westminster community. At her memorial service, more than 300 staff members, students, parents, alumni, and friends joined family members in celebrating her dauntless spirit and significant accomplishments.

Westminster’s philosophy expanded under the leadership of the school’s second (and current) Head, who was personally and professionally mentored by the school’s founder. Mr. Glover’s personal upbringing manifested itself in an overall emphasis on striving for excellence, showing pride in work and attention to matters of presentation, whether personal or in the physical plant. His education in the humanities, with an emphasis on classical learning, dovetailed with the program established by Mrs. Goll, but he brought additional interests and energy to the school. Mr. Glover was instrumental in developing the P.E. and athletic programs, including helping to found the Capital Athletic Conference and insisting on league parity for girls. His work with the students in drama and other hands-on teaching, along with his personal evolution, persuaded him of the central role of the arts in the development of the individual. While exposure to the arts had always been included in the Westminster program, the powerful effect of participation in the arts on the children’s confidence, poise, and sense of possibility gradually emerged as a highly desirable and defining characteristic of the Westminster program.

This development of both athletics and arts as important components of a Westminster education, in addition to the strong academic program, gave rise to the ideal of a Westminster graduate as a “Renaissance” person, knowledgeable, interested, and actively engaged in developing him/herself in many directions. From this arose a school motto: “Celebrate strength, strengthen weakness.” In other words, rather than focus on one outstanding ability a child may evidence, the Westminster program provides opportunities to “shine” in areas of strength, while nurturing and challenging the student in many areas. The goal of balancing the energies and development of mind, body, and spirit emerged in the school philosophy.

With a strongly defined mission and philosophy and only two Heads since its inception, Westminster School has had the opportunity to evolve a consistent and well-defined ethos. Students, parents, staff members, and close associates of the school understand what is and isn’t “the Westminster way.”

Having reached the milestone of its 50th anniversary (in 2011-2012), Westminster’s goal is to preserve the essential mission and philosophy of Westminster School, while actively evolving the program to meet the needs of 21st-century children and their parents. It is an exciting time for Westminster School, as it gazes toward the next half-century and ever-expanding horizons.

1962-1971 – Westminster School is housed at St. Albans Church on Columbia Pike in Annandale. The school began with grades K-2 and over time, expanded to include grades 3-8.

1971 – Westminster School opens at 3819 Gallows Road with 14 classrooms and an office. What is now the back hall of the school was the main hallway. Classes are also held in the Stone House. The Stone House also houses the library during this time.

1979 – The CAC (Capital Athletic Conference) is created.  Westminster is a founding member.

1985 – The “blue wing’ is added, which houses new spaces for music, art and the library.

2002 – Groundbreaking on the Jane Goll Center for the Arts.

2003 – The Jane Goll Center for the Arts Opens, comprising a new gym,
library, music room, orchestra room, and renovation of the old gym into a
theater. At the same time, a new bell-tower entrance and lobby were
constructed, and the parking lot was rebuilt to increase parking spaces and
include a traffic island.

2005 – The Shakespeare windows are installed in the Skylight Corridor. The
windows were created by Mr. Torne Shipman, who later joined the
Westminster School staff as Maintenance Supervisor.

2007 – The garden area in front of the school is completed.

2009– Two acres of land are acquired, with plans to build a new athletic field.

2010 – The Griffin Academy Preschool is established and opens its doors at 6800 Columbia Pike, Annandale, VA.

2018 –  The Griffin Academy preschool moves to the main school building.